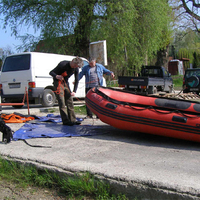 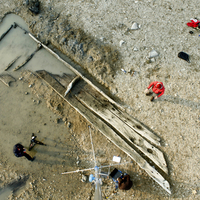 The Argonauts Programme is an interdisciplinary, multinational research programme of the Drava River Valley. We would like to study the relations between the river environment and the habitants of the neighbouring land during the archaeological periods. The project is financially supported by the Norvegian Fund and the OTKA of the Hungarian Accademy of Sciences (Id: NNF 78931).
The analysis will be based on the archaeological, geographical and geological data collected on the research-area in the framework of the project. Field research is supplemented by the analysis of 18th - 19th c. manuscript maps, and data of medieval and early-modern written documents. The collected data will be analysed with GIS technology. We focus on the floodplain area where the river was decessive environmental force, and this offer us a detailed insight into the medium and long term changes of human and environmental relations. The changes of the riverbed and flood levels, as well as the changing of land utilization will be investigated.
Fieldwork activity contains underwater archaeological exploration, archaeological field-walking and geological-geomorphological analysis. During the whole duration of the project fieldwork is carried out in optimal seasons of the different discipline. We had an underwater survey in the area of Drávatamási, at a logboat accumulation (the main underwater archaeological site of the entire region) in the summer of 2009. In the framework of the project we mapped the site by side-scan sonar, directed underwater survey and collected samples for dendrochronological analysis. Archaeological field-walking was carried out in the outskirts of Somogyudvarhely and Bélavár. The importance of this research area follows - among others - from the fact that we have available detailed medieval sources concerning the region. This zone is also an intermediate area, which links our previous (2007) research area, and the land East of it, and allows integrate previous research material into the presented programme. A collection of digitalised early maps and documentary sources was also compiled. A 3D surface modell of the research area was prepared based on 1:10 000 scale topographical map. This map allows us to identify paleo-channels of the Drava and its tributaries, and helps to investigate the sequence (the “stratigraphy”) of these channels.
Figure 1. Side-scan sonar mosaic of the Drávatamási logboat site. The left bank of the river is on the left side. The width of the picture is 25 m. Logboats could be identified as narrow, tubular objects.
As a result of first investigations we have discovered new archaeological sites and collected detailed information on known sites (location, intensity, periods, even remains of industrial activity). From ancient maps we have paleo-environmental data, including land cultivation, the proportion of forests, location, and changing of old river channels. Dendrochronological analysis of the logboats (which are dated to ca. 1600 AD by archaeological methods) were dug out from large oak trees, grown in the same region. This is a spectacular evidence for forests of giant oak trees along the Drava, described also by historical sources. Tree-rings also conserve the characteristics of the local climate (because the trees grew different sized tree-rings according to the actual climate).
Some of our observations do not fit into our pre-research hypothesis. We were supposed, that the sites would follow the lines of the old river channels, and the chronological sequence of the sites would follow the changes of the riverbed. Comparing the collected data, we found, that although the sites are in close relation with the depressions of paleo-channels, there is no chronological sequence, which would follow the evolution of the river. This means, that sites are situated along the banks of old, and inactive river-channels. The objective of further fieldwork is to identify similar pattern in the area East of Drávatamási, where the floodplain broadens again. It was also found, that the some periods are much more represented on this low plain, for example Arpadian Period (11th-13th). At Arpadian Age sites traces of industrial activity (probably iron smelting) often turned up. The case of the Árpádian Period site of Somogyudvarhely 12 gives us interesting evidences. The site is located North-East of a wet depression - remain of an old meander - probably not an active channel in the age of the settlement. Close to the wet area, near the edge of the higher surface of the old riverbank we found high concentration of slag, furnace-wall fragments, pieces of tuyères and even melt iron. Arpadian iron industry and the possibility of using alluvial iron ore is an important question in the study of this period. There are evidences for the relation of alluvial iron, wet areas and Árpádian settlements from the Kaposvár area, which is ca. 80 km north of the Dráva Plain, and it would be important to verify the same kind of industry here. Figure 2. 3D surface modell of the research area at Somogyudvarhely and Bélavár with the representation of archaeological sites. The labirynth of intersecting old river-channels, and their relation to the archaeological sites is visible. Somogyudvarhely 12 marked with orange.
From medieval and early-modern historical sources we have lot of evidences for the existence of large oak-forests in the region. The land between the town of Csurgó and the Drava was called “the land of swie-herds” in a 13th c. charter. The Drávatamási oak logboats are relics of the dissapeared oak forests.
The results of the first field researches have opened questions, on which we are planning to focus in the second part of our research programme. The dating of old riverbeds, the identification of possible alluvial iron sources, the analysis of pollutions from historical industrial activity, the analysis of archaeological oak samples to identify climate events, the analysis of sediments to search for changes in the history of the river, the continuation of inland and underwater survey to find more evidences for the history of the floodplain is in the scope of 2010-2011 activities.
We will integrate more data into the GIS. The internet site will be upgraded to host GIS data and research information. As an addition to scientific publication we opened our communication to the great public with the help of scientific divulgation and the internet (through a blog), we would extend our communication for international non-scientific public, and also we made the first steps to produce a quality scientific-divulgation film on underwater archaeology.
Facebook Tumblr Tweet Pinterest Google+ Tetszik
0